It’s a safe bet that parts of the most recent tax reforms left you a little — or very — perplexed. If that’s the case, you’re not alone. According to one survey, the new tax law confuses 77% of respondents. The confusion is understandable — there are a lot of moving parts when it comes to any tax changes.

Don’t worry, TurboTax Has You Covered

TurboTax is always up to date with the latest forms and 100% accurate calculations. With TurboTax, you can file your taxes with complete confidence – and get your biggest possible refund, guaranteed. AND, as a credit union member you can save up to $15 on TurboTax federal products. Click here to access TurboTax and your savings!

To help clear up the confusion, Johns Hopkins Federal Credit Union has provided the top 5 tax reform changes you should know:

The seven tax brackets found in the former law remain, but a number of tax rates are lower. The income thresholds at which the rates apply also change.

The income thresholds at which these brackets kick in change for single and married joint filers, as well. 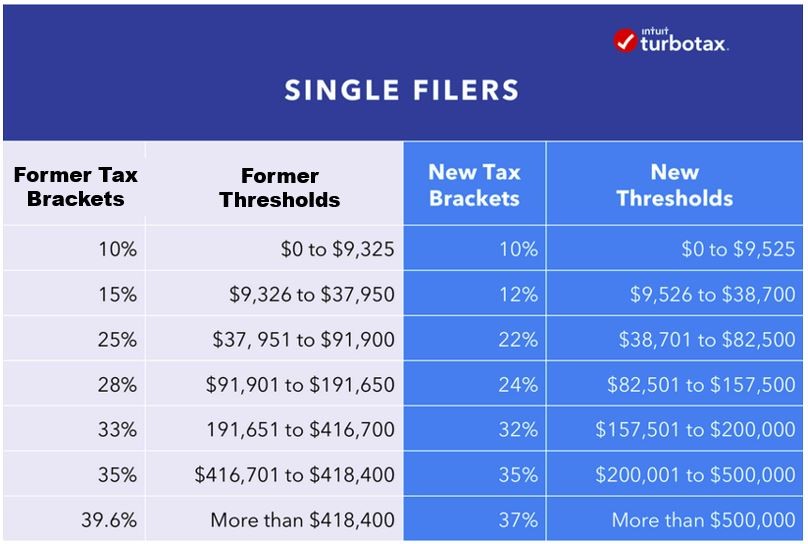 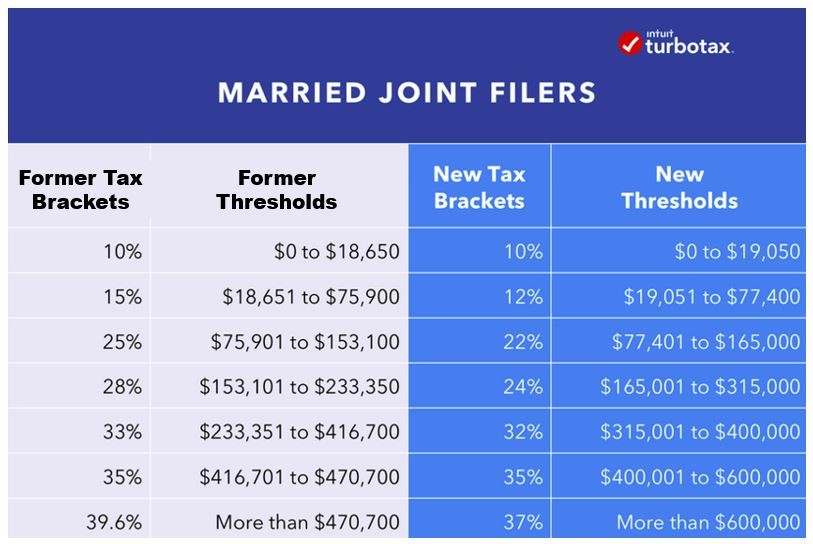 These changes make this as good a time as any to examine deductions that can place you in a lower tax bracket and lighten your tax load. Available options include an IRA, 529 plan, HSA, or similar tactics.

2. Tax Relief for Individuals and Families

Increased standard deduction:
The new tax law nearly doubles the standard deduction amount. Standard deductions for single taxpayers jump from $6,350 for 2017 taxes to $12,000 for 2018 taxes (the ones filed in 2019). Married couples filing jointly see an increase from $12,700 to $24,000. These increases mean that fewer people will have to itemize. Today, roughly 30% of taxpayers itemize. Under the new law, this percentage is expected to decrease.

Increased Child Tax Credit:
For families with children the Child Tax Credit doubles from $1,000 per child to $2,000. In addition, the refundable amount grows from $1,100 to $1,400. The bill adds a new, non-refundable credit of $500 for dependents other than children. Finally, it raises the income threshold at which these benefits phase out from $110,000 for a married couple to $400,000.

While parents are putting away money for their children’s education, available information suggests they’re not saving enough. An increase in the Child Tax Credit translates to an opportunity to increase such funds via a 529 plan. Doing so effectively increases the credit since 529 plan funds are tax deferred (and are completely tax free if used for qualified education expenses). If you’re a parent wandering the maze of education costs and funding solutions, this approach makes for an outstanding reinvestment opportunity and is something worth careful consideration.

3. Eliminations or Reductions in Deductions

State and local taxes/home mortgages:
The bill limits the amount of state and local property, income, and sales taxes that can be deducted to $10,000. In the past, these taxes have generally been fully tax deductible. The bill also caps the amount of mortgage indebtedness on new home purchases on which interest can be deducted at $750,000, down from $1,000,000 in current law.

Health care:
The bill eliminates the tax penalty for not having health insurance after December 31, 2018. It also temporarily lowers the floor above which out-of-pocket medical expenses can be deducted from the former law floor of 10% to 7.5% for 2017 and 2018. So for 2017 and 2018, medical expenses greater than 7.5% of adjusted gross income can be deducted as opposed to the higher 10%.

The bill eases the burden of the individual alternative minimum tax (AMT) by raising the income exempted:

The result: fewer taxpayers will pay the AMT.

AMT exemptions were not originally indexed for inflation, which meant an increasing number of taxpayers qualified for the tax (since their wages increased). If you fell into this category, speak with a Johns Hopkins Federal Credit Union representative for information about how this change most affects you.

5. Eliminations and Reductions for Small Businesses

Self-employed (contractors, freelancers, sole proprietors) and small businesses:
The bill has a myriad of changes for business. The biggest includes a reduction in the top corporate rate to 21%, a new 20% deduction for incomes from certain type of “pass-through” entities (partnerships, S Corps, sole proprietorships), limits on expensing of interest from borrowing, almost doubling of the amount small businesses can expense from the 2017 Section 179 amount of $510,000 to $1,000,000, and eliminates the corporate alternative minimum tax (AMT).

Don’t worry about memorizing the new tax laws, TurboTax has you covered and will be up to date with the latest forms and 100% accurate calculations. AND, you can save up to $15 on TurboTax federal products. When you are ready to file, click here to access TurboTax and your savings!